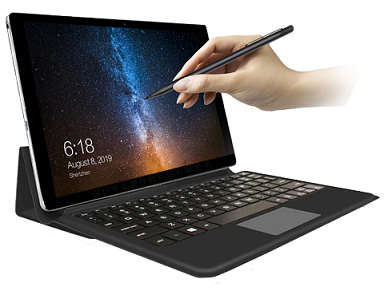 A tablet computer has a portable design. Small and light, a tablet lets its user perform basic tasks while on the go. The tablet’s interface is touch-friendly to allow the user to interact with it without the need of a physical keyboard or stylus. In most cases, the tablet computer lasts a few hours longer than a laptop and lets the user do more tasks before requiring a recharge. It connects to the Internet via its built-in Wi-Fi antenna, but some models of tablets also have 3G connectivity.

Like other forms of computers, the tablet has a processor, camera, speakers and ports. Processors that power tablets perform relatively slower than the ones found in desktop and laptop computers. These mobile processors run at a lower clock rate to improve the battery life and reduce heat production. The cameras in tablets are typically inferior to cameras in smartphones, but they are suitable enough for video conferencing.

Some tablets are known as convertibles and hybrid tablets, which have features that blur the line between slate tablets and laptops. They’re designed to be portable, but they also have physical keyboards or keyboard docks that turn them into laptops.